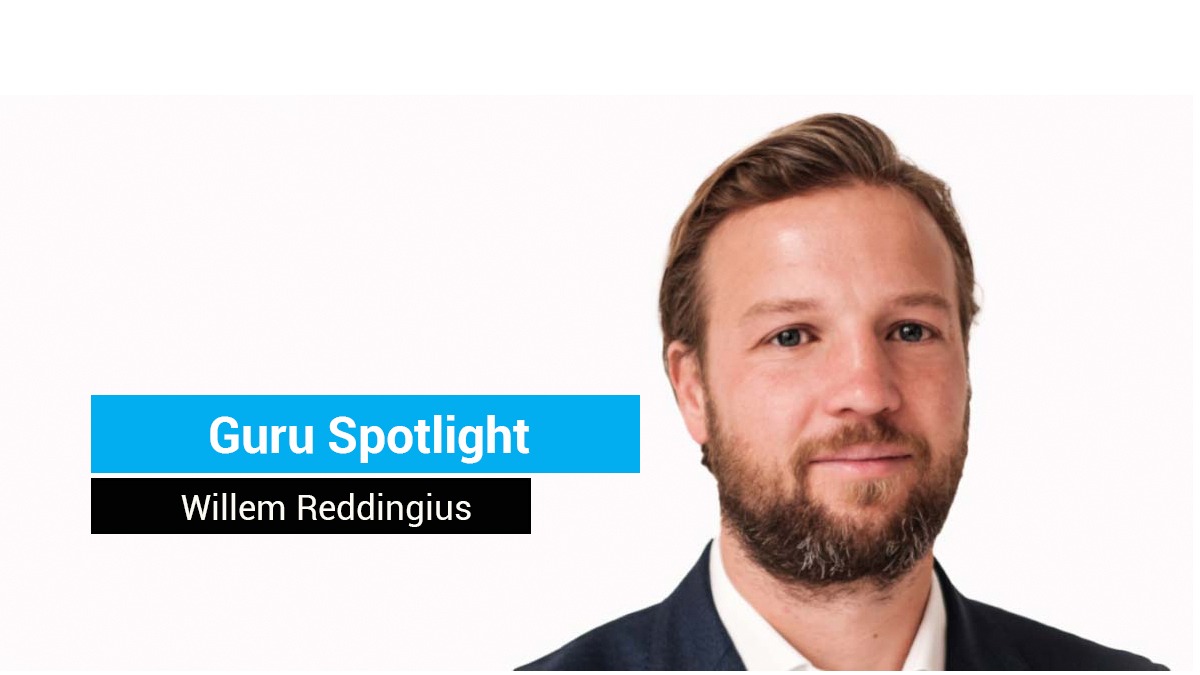 In the fourth installment of our ever-popular Guru Spotlight series, we sat down with our man in Amsterdam, EstateGuru’s Director of Capital Markets, Willem Reddingius.

We met up with Willem online to talk about the culture at EstateGuru, what it’s like to work at one of the big four accounting firms, and the soothing effects of studying insects as they go about their daily hustle.

How long have you been with EstateGuru?

Since the first of January this year, so almost one year.

What would you say is your mission at EstateGuru?

You’re aware of the company’s key values: growth orientation, boldness, freedom, honesty, determination, and empathy. Do you experience any of these in your daily working life?

Yeah, for sure. I think we’re definitely, really, really bold. We’ve set our targets extremely high, we’re very ambitious in trying to achieve them, and I think we have a lot of traction. I also think empathy, for sure. EstateGuru is full of nice people who care for each other. And if you ask for help, you’re getting it. Of course, I’m in Amsterdam, so I don’t see you guys that much, but there’s a tangible sense of togetherness and a real feeling of camaraderie. And a feeling that we’re here to win. Freedom in the working life for me is important to have. And I have it, especially sitting here, in Amsterdam. The freedom is immense, working from home. You make your own calendar and make sure that you get the work done, versus being in an office every day. So freedom is definitely a big part of the culture, and honesty too.

Okay, that’s great. So I heard that you left one of the big four to work for EstateGuru, is that right?

Yes, I left Deloitte which has over 200,000 people. Really, really big. But I think working for a scale-up like  EstateGuru is more fun in the sense that it’s more adventurous, and also more chaotic. It has its own challenges, but I prefer the culture at EstateGuru.

Okay, let’s move away from the pure work stuff. I have heard through the grapevine that you’re into Myrmecology.

Haha, yes, explain a bit about that.

Yeah, I have loved ants ever since I was really young. I’ve been to many countries in Africa and Asia, and everywhere I went, I studied the ants, and also took pictures. The ants in Asia and Africa are really quite exotic, but I also like the ants in the Netherlands. I even found myself on holiday in Portugal looking at ants, so I thought: why don’t I keep them as pets? So now I have an ant colony in my home office and I feed them flies, live flies, and fruit. They’re very low maintenance and only need feeding maybe a couple of times a week. Otherwise, they just stay in their formicarium. I find myself studying them as they go about their daily routine, cleaning the nest and such, and it’s very easing to the mind. Very relaxing. It’s a strange hobby, but I find it intriguing.

Yes, I read a lot. At any given time, I’m probably reading at least two books. And I’d say I finish one every two months on average.

Wow. I know this might be difficult, but can you give me three books that you think everybody should read?

Yeah, for sure. I think everyone should read ‘A Short History of Nearly Everything’, by Bill Bryson. I also read a lot of management books and startups books. I’d say, in the context of our sector, ‘Seven Habits of Highly Effective People’, by Stephen R. Covey, is a really good book that stands out amongst management books. I was surprised because I thought it would be pretty standard stuff, but it was really good. And it’s obviously stood the test of time, and I think for good reason. But that’s more in the self-help category. I think ‘The State of Africa’, by Martin Meredith, is a really interesting book as it explains post-colonial Africa country by country and it really shows you how Colonialism adversely impacted these countries. Another book, especially for those in a corporate finance background, would be ‘Liar’s Poker,’ by Michael Lewis.

Last question. If you could give some advice to people who would like to join EstateGuru, what would it be? Or why should people with exceptional talents join?

I think the impact you can make as a person here is significant. You can really learn about the ins and outs of the business, and once you understand how and why EstateGuru is a success, that gives you a much deeper understanding of business as a whole. You learn a lot by doing here.

OK, great, thanks, Willem. We appreciate you taking the time to talk with us today.